We are heartbroken to share the news of the passing of our beloved Executive Director, Howard Manning on Saturday, April 2nd.   We ask your prayers for Pam, his children, grandchildren and family.  Service Information can be found HERE. 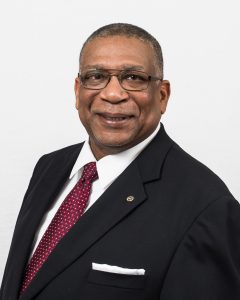 Howard Lewis Manning, aged 69, of Willow Spring, NC, passed away on Saturday, April 2, 2022 at WakeMed Hospital in Raleigh following a brief illness.  Howard was born on October 3, 1952 in Laurinburg, NC to Lenwood and Lou Bertha (McQueen) Manning.  He graduated as class valedictorian from Maxton High School in 1970 and then attended St. Augustine’s University in Raleigh, where he received a B.S. in Chemistry in 1981.

Howard served in management at Almay and Revlon Cosmetic Companies and GlaxoSmithKline (GSK).  After retiring from GSK, Howard began to volunteer at Dorcas Ministries and was eventually appointed as its Executive Director in 2005. He served in that position until his death.

Howard never met a stranger.  His remarkable memory allowed him to recall the names of people he met years ago.  Compassion and his Christian faith guided his principles, especially when it came to serving his family, church, Rotary Club, community service, and the scores of  people who turned to Dorcas Ministries when they needed help. To know Howard was to love him.

Howard’s board and committee assignments included service on the Board of Directors of the Cary Chamber of Commerce, Past President of the Cary Rotary Club, Inaugural Chair of the Western Regional Community Advocacy Committee, Board Chair of the Centre for Homeownership and Economic Development, and a member of Capital Area Workforce Development Board.  In 2017, Howard received Cary Chamber of Commerce’s Citizen of the Year Award.